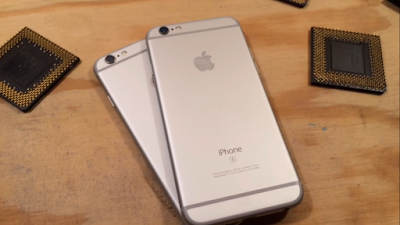 There's a new iPhone on the scene and because it's an S series it looks exactly like last year's iPhone.  However, Apple's tagline this time around is "the only thing that's changed is everything".  And in some sense that's true.  There's new aluminum here that's the same 7000 series aluminum that's used in the Apple Watch.  It's stronger and should prevent "bendgate" issues.  The glass on the front is also new as well and should be more resilient.  In addition to that the phone is one tenth of a millimeter wider, two tenths taller, and two tenths thicker.  Most of those specifications you're not going to notice.  The one you will notice is the weight.  Because of the extra sensors for 3D Touch the phone is 14 grams heavier, and that's a welcome change.  To get an idea of exactly how heavier 14 grams is, it's about the same as 14 M&M's.


The biggest hardware change with the new phones is the introduction of 3D Touch.  The screen can now sense how hard you're pressing on it allowing for a new level of interaction.  Pressing slightly harder on Evernote allows you to jump straight into a note.  Or 3D Touch the messages or phone icons to jump straight to the people you contact the most.  Another way that Apple leverages this new input is with what they're calling Peek and Pop.  When in a list of messages or pictures you can press slightly harder on an item to get a preview of it.  Then swiping up on that preview takes you to some common tasks for that item.  Pressing slightly harder will allow you to Pop directly to it.  You can also use 3D Touch to move the cursor around in a block of text.  This is the new feature that I've used the most.  Pressing harder on the keyboard turns it into a trackpad and you can press even deeper to select text.  This is much faster than the old magnifying glass method.  My second favorite use of 3D Touch is app switching.  You can press slightly on the edge of the screen and swipe in to bring up the app switcher.  Swiping further across the screen will automatically switch you between the most recently opened apps.  Think of this as alt + tab for the iOS.

The front camera received a huge upgrade.  It jumped from 1.2 megapixels to 5!  It also can now make the screen light up 3 times brighter than normal to be used as a flash.  The result is a much more useful selfie shooter.  The rear camera received a spec bump as well.  It jumps from 8 megapixels to 12 and while the photos aren't drastically better the video is.  There's now enough pixels for 4k video at 30 fps.  If you have a monitor that can benefit from the extra resolution, definitely click subscribe for future 4k videos on my channel. Then there's Live Photos.  Apple created a way to capture one and half seconds of audio and video before and after the shutter is pressed.  You know it's enabled when you see the word "live" in yellow at the top of the screen.  You can 3D Touch on any Live Photo to make it come to life and show you what was happening in that moment when the picture was taken.  It's a neat idea but I can't help but feel that this is more like the gimicky features that Samsung puts in their Galaxy phones.  You'll probably show your friends how cool it is but after the first couple of weeks you'll never use it again.  Some shots are more conducive to Live Photos than others.  Most likely you'll leave this feature disabled given that it takes up twice the space of a regular picture and can degrade the normal camera performance.  However there will be certain situations where you'll find it useful.  The best application of this is your lockscreen wallpaper.  You can set any Live Photo as your wallpaper allowing you then to 3D Touch on the lock screen at any time to make the photo come to life.  I can definitely see where parents would want to do this so they can quickly and easily share moments of their kids without ever unlocking their phone.

And what would an S refresh be without some extra speed.  Not only did the processor get its normal speed bump but now for the first time in many years there's twice as much memory as well.  And the memory that's being used is faster.  This is most noticed when opening apps.  The iPhone 6S in my left hand opens everything noticeably faster than the iPhone 6 and the iPhone 6 certainly wasn't slow.  This phone is blazing fast and should help future proof you a little for iOS updates in the years to come.  Don't get caught up in the spec race though.  Even with twice the memory the iPhone 6S still has half the RAM as some leading Android phones.  However, the numbers don't matter as much as the experience and Apple is very good at optimizing the experience to make their phones perform better than phones with much better specs.  Another area you'll notice this extra RAM is the browser.  You can now jump between lots of open tabs without the need of refreshing the webpage.

I've always felt that Touch ID on the previous iPhones was plenty fast.  Apple improved upon this in the iPhone 6S though to the point where it's almost instantaneous.  The iPhone 6 is plenty fast here requiring you to only rest your finger on the home button for a second to unlock the phone.  With the iPhone 6S it's almost impossible to press the home button without it reading your fingerprint.  This can be annoying if you're used to waking your phone by the home button to see notifications on the lock screen or to jump into the camera using the lock screen shortcut.  The best workaround I've found is to swipe your finger over the button to prevent it from reading.  However even when doing this the Touch ID sensor will still register a read from time to time and unlock your phone.  Apple should really consider creating a new shortcut to jump directly to the camera from the lock screen.  Maybe something that implements a 3D Touch gesture.

Given all these upgrades should you get the new iPhone?  That's certainly a decision you'll have to make depending on how you use your phone.  If you've already got an iPhone 6 then chances are the extra upgrades and features aren't worth the cost.  However if you're coming from an iPhone 5S or earlier then the larger screen size alone would be worth it, not counting all the drastic speed improvements.  Apple's done a great job here for an S series refresh and are already reporting a record number of sales like every year. They've managed to make an already fast smartphone with one of the best cameras even better putting them at the top of the smartphone pack once again.  I'm excited to see what developers will do with 3D Touch and look forward to shooting some 4k video for my channel in the near future.  While I didn't do a deep dive thorough review on this like normal, if you have specific questions I didn't cover leave those in the comments and I'll be happy to respond.