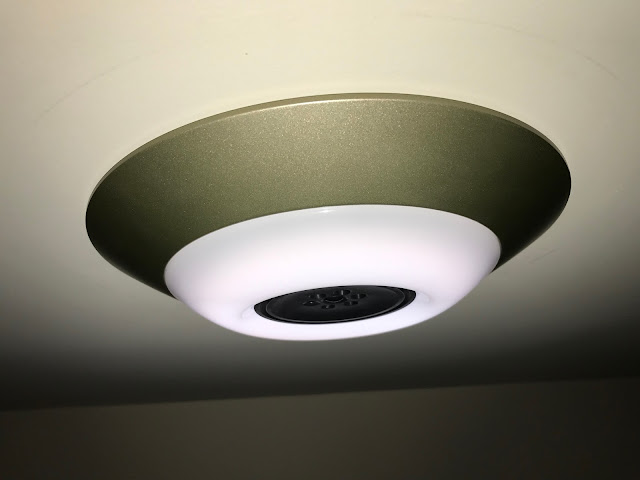 Smart lighting is a lot like smart thermostats. It's a great entry level way to add additional intelligence to your home. And this Premier LED light by Haiku is one of the smartest you can buy. Haiku was kind enough to send me this light for review, and in this review we'll go over its features to help you decide if this is the right smart light for your home.

For starters this is a hard wired fixture and not a smart bulb that you add to an existing fixtures. So it won't work in every environment. The light can replace can lights and regular fixtures indoors or out in about ten minutes and is real easy to install. It features built in motion sensors and ambient light sensors meaning the light can automatically turn on and off as you enter and exit rooms. It can also decrease the brightness as more natural light comes in through the windows and then increase brightness if you close the blinds or as the sun sets later in the day. You can also adjust the color temperature from a cool blue to a warm yellow. You can't do purples and greens like some smart lights can but my guess is most people really don’t use that. Instead you can make the light a cool blue in the kitchen to help you to see better and be more alert. Or a warm yellow glow in the bedroom at night to help you wind down from the day.  You can adjust the color temperature, the brightness, and the motion settings all on the included wireless remote. For the more advanced features you'll want to download the free Haiku app.

My favorite feature of the app is scheduling. All of the settings that I've mentioned can be adjusted over time with a schedule. For instance. I have my light switch to ¾ brightness with a cool color temperature first thing in the morning. Then it gradually changes to a warmer light as the day progresses. Lastly around bedtime the light dims to a super low setting. That way when I get up in the middle of the night I'm not blinded by a super bright light. I've also used the scheduling to have my light turn on and off randomly throughout the evening to simulate occupancy when I'm on vacation. The app allows you to group up to eight lights together so that when one detects motion they all come one.

Lastly the app is where you update your light’s firmware. During the months I've had this light installed I've received a few firmware updates that have added some really neat functionality to the light. The update is automatically pushed to the app and applied when you choose. It works really well. It's nice to know that your light will continue to improve over time as Haiku continues to innovate and add new features.

The biggest downside is that the lights currently don't support Apple’s HomeKit. And since HomeKit requires specialized hardware, that's not something that Haiku can push out in a future software update. They do however support Amazon's Alexa though. So if you want to be able to control your lights by voice that’s certainly the route to go.

Another thing to be aware of is that the light requires continuous power in order to operate. Meaning that if you turn it off at the wall switch then you won't later be able  to turn it back on within the app or the wireless remote. You pretty much want the wall switch in the on position and then forget it exists. At first that seemed like a big negative to me. But then I realized that because of the scheduling and the sensors the light pretty much does exactly what I’d want it to do at all times with little to no interaction from me.  The one caveat to this is when I want to dim the lights for movie night.  I can easily do that in the app in a few seconds or ask Alexa to do it.

If you've seen my review of the Haiku fan then you know that their build quality is incredible. The same goes for their lights. Each light is tested and inspected in Lexington Kentucky before it ships to you so you know you're getting a quality product. And they're backed by a five year warranty, although realistically it's going to last a lifetime.

With such a crowded smart light market it's hard to know where to begin. But if you're looking for a premium fixture with superb build quality that's loaded with features that you'll actually use, then look no further. If you have any questions I didn't cover in this review then leave those in the comments.

October 08, 2015
There's a new iPhone on the scene and because it's an S series it looks exactly like last year's iPhone.  However, Apple's tagline this time around is "the only thing that's changed is everything".  And in some sense that's true.  There's new aluminum here that's the same 7000 series aluminum that's used in the Apple Watch.  It's stronger and should prevent "bendgate" issues.  The glass on the front is also new as well and should be more resilient.  In addition to that the phone is one tenth of a millimeter wider, two tenths taller, and two tenths thicker.  Most of those specifications you're not going to notice.  The one you will notice is the weight.  Because of the extra sensors for 3D Touch the phone is 14 grams heavier, and that's a welcome change.  To get an idea of exactly how heavier 14 grams is, it's about the same as 14 M&M's. The biggest hardware change with the new phones is th
1 comment
Read more