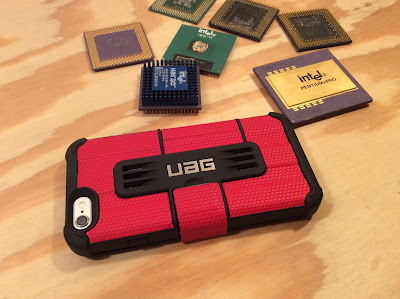 If you've seen my review of the regular Urban Armor Gear case you know that I'm a huge fan of how rugged it is while still being very thin and light. I always assumed that the folio version was the same just with an added front cover to store a few credit cards. But when I saw UAG drop this case from the window of a Porsche going 120mph, I knew I needed to get my hands on this beast. And given how rugged it is, I knew my standard 4ft drop test wasn't going to cut it.

UAG was kind enough to send me this folio case for review, and although they weren't able to send me their Porsche 911 Turbo S, I did manage to construct this crude catapult. And as far as I know, this is the Internet's first catapult iPhone case drop test.

I did this catapult test twice while recording from many different angles including from the iPhone 6 itself. Hopefully this shows how confident I am in this cases ability to withstand drops from much higher than what you'll encounter in normal daily use.

The corner skid pads definitely did their job. Two of the corners received some scratches and the inside corner was slightly scratched when the case flopped open. Most of this wiped off though. The rest of the case was mostly unharmed which is pretty amazing considering how high it flew. The iPhone was well protected and still works great.

Now for a closer look at the case. The outside is a mix of hard polycarbonate and soft rubber that UAG calls frogskin technology. There's a front cover that can hold up to three of your most used cards and it stays closed thanks to a magnetic latch.

The frogskin technology is a really interesting material.  It almost feels like an animal skin.  It's very grippy but not so grippy that it's hard to remove from your pocket.  It certainly won't slide around on smooth surfaces.  It does appear to be glued on though so I wonder how long it will last before the edges start to peel up.

The inside of the front flap is a smooth suede like material.  On some of the edges you can see white fuzz or threads that make the case seem cheap like the material is fraying.  I haven't experienced any durability issues with it thus far though.

The volume buttons have a small slit under them that makes them a pleasure to use, but they're mostly flush with the case which can make them hard to locate if you're not looking.  The mute switch is easily accessible as you'd expect.  Each of the corners has a durable skid pad to receive all the impact from drops.  The power button works just as well as the volume buttons.  Across the bottom there are very generous openings for all your ports.  Instead of leaving big gaps around these ports UAG fills this area by bringing the material flush to the phone.  This not only looks better but also helps keep dust and debris out.  There's an adequate cutout for the camera and flash as well as the typical UAG cutouts for the iPhone logo and branding.  The magnetic flap is a good mix of strength while still being easy to use.  It naturally flaps closed which I really appreciated.  On the bottom of the front cover is a cutout for the home button that wasn't included on earlier versions of this case.  This prevents the front cover from accidentally pressing the home button when closed.  For the card slot there's a thumb cutout that helps with removing the cards.  I did find this more time consuming to use that a normal wallet.  Especially since you have to remove all three cards if you only need the back card.  When sliding the cards out you definitely have to use the thumb hole since trying to slide the cards out from the top causes them to hit the incline of this slot and get stuck.  At the top is a cutout for the earpiece.  This means you can close the case and still talk on the phone.  When done with a call you can press the power button to end the call and never have to open the case.  There's lots of play in the hinge for the front causing it to flop around and seem a big flimsy.  However it's stitched onto the case very well.  I don't see durability being an issue with this portion of the case.  The floppy hinge also means that the front doesn't always line up properly for closing.  This was annoying at first but you quickly get used to it.

One handed use is surprisingly simple and doesn't require much effort at all.  When using your phone you'll most likely want to fold the flap around back.  I found myself wanting to flip the magnetic flap backwards to make it attach and get it out of the way.  It would have been great if UAG would have included magnets in the cover itself that would cause it to automatically attach to the back of the case when folded back.

One of my biggest frustrations with the case was photography.  When in portrait mode the flap dances around at the bottom of the picture causing you to either hold the flap down or all the way open.  One handed portrait photography isn't really doable.  When in landscape mode it's a non issue.

Although the case almost always flops open when dropped, the magnetic flap keeps it closed really well in normal daily use.  There's a very generous lip on the case to allow room for the cards in the front cover.  This also provides more than usual protection for your iPhone.  Even if you drop this case with the cover open your phone should be well protected.

To remove your phone start from the top corner by the volume button and work your way down to the bottom.  The inside features a honeycomb design similar to that of the regular UAG case.  However, the honeycomb wells are deeper here providing much more shock protection.  You can also see just below the UAG branding the stitches that I referenced earlier for the front cover.  To insert, simply start with the volume button side first and snap the phone in place.

And although the flap doesn't double as a kick stand, it does help stabilize the phone when on it's side.  This is helpful for timer photography without a tripod.  However, it's easily tipped over.

The real elephant in the room is the thickness of this case.  When put beside the regular UAG case it's obvious that this thing is massive.  How else do you explain its ability to survive a 15-20' fall to concrete when launched from a catapult.  It measures in at 17.5mm thick.  That's 2mm thicker than an Otterbox Defender!  For what it's worth, if you search Google images for thickest iPhone 6 case, this is the 10th result.

I can definitely see why UAG was willing to drop this from a car going 120mph.  If you're looking for an extremely rugged case with the ability to hold a few cards as well, then look no further.  The case currently sells for $30 on Amazon or $40 at UAG's site with free shipping.  They also make a version for the iPhone 6 Plus as well.  If you have any questions I didn't cover please leave those in the comments.


In the end this is a really durable iPhone case.  And although it's extremely thick it doesn't seem that way in normal daily use.  I think that's primarily because when using it you open the front cover removing a lot of the thickness and then reach down inside to where the iPhone is.  Realistically the only part that you'll experience is in between the iPhone and the back.  When you look at it that way it puts it on par with most other rugged iPhone cases.