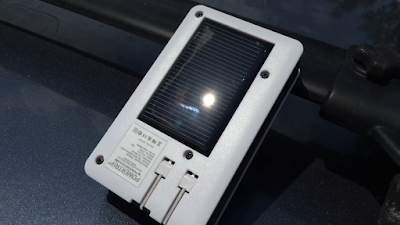 Portable battery chargers are common place these days. In order to stand out in the crowd you have to do more than just charge a smartphone. That's exactly what Powerstick has done with their PowerTrip battery charger. PowerStick was kind enough to send me this charger for review. In this review, we'll see if these additional features make the PowerTrip stand above its competition and make it worth the $99 that PowerStick requires.


PowerStick makes chargers of all different shapes and sizes. One of the most interesting things about this company is their ability to print custom artwork onto their chargers. They show many examples of this in the included product catalog. The review sample they sent me was customized with the same artwork featured on my website as well as my website name. The artwork is nice quality, seems pretty durable, and doesn't scratch off easily. This is great if you're looking to give these away as marketing material and it only adds $10 to the price. Additionally you can get the charger with 8GB of storage for $10 or 16GB of storage for $20.

Around the outside of the device is a USB port for connecting your tablet or smartphone. There's an LCD display that shows the current battery level at the press of a button. This display also shows when your charger is discharging or recharging. There's also a port for recharging via USB using the included cable.   The AC plug is integrated into the charger and easily folds out. This is great so you don't have to remember to bring a cable for charging the device. On the back is the most distinguishing feature - the integrated solar panel. I'd like to say that this panel works as well as the AC method of recharging but the truth is that this is a large battery and a small solar panel.  We'll cover the solar panel in more detail in just a moment. There's also a sticker with details about the charger of which the most important one is the output rate of 1.5 amps. It'd be nice to see this charge at the max 2 amps that most devices support but 1.5 isn't too bad.

The charger is 26mm thick by 63mm wide and 106mm long. It's slightly larger than a deck of cards in ever dimension.

The battery's capacity is 5700mAh. In my testing I was able to charge my iPhone 6 from dead to fully charged two times or my iPad Mini 2 to about 80%. To use the charger you plug in your device and press the power button. The display then begins counting up showing that it's discharging and how much battery is left in the charger. When your smartphone or tablet is fully charged the charger will automatically go into standby mode. This does cause a message to display on my iPhone that mentions that the accessory isn't supported but that's just a small annoyance and doesn't cause any problems otherwise.

When in the sun the display will indicate that it's charging only if you press the power button. Then after a few seconds the display goes back to sleep. This is to prevent the device from wasting excess power while recharging via solar. I was really hopeful that I'd be able to leave this charger on the dash of my car and keep it topped off. I had mixed results though because of the angle of the windshield and possibly the UV coating. I had better results when on top of my car but this obviously isn't practical. PowerStick says it takes roughly eight hours to get one bar of charge. I couldn't reproduce those results though mainly due to the fact that the solar panel has to be in direct bright sunlight to charge. If it's a cloudy day then you can forget about it. It's still a really neat feature though and I was able to go from six bars to all eight over the course of a few days in the sun. It's a great idea for camping or by the BBQ. Just don't expect to generate enough power to charge your device in one outing.

The best way to recharge the device by far is via the AC outlet. It takes roughly eight hours to recharge the device when it's fully depleted. Another great feature of this portable charger is you can use it to charge your smartphone or tablet via the AC outlet as well. The charger will not only recharge itself but will pass thru power to any connected USB device as well. This would be really helpful for traveling so you wouldn't have to bring a portable charger and a separate AC charger. The charger can be stored and maintain its charge for up to a year. It can also be recharged over 1,000 times without losing capacity.

During the course of this review I had the pleasure of dealing with the wonderful staff of PowerStick not once but twice for a faulty product. The first review sample I received wouldn't charge via solar. They immediately sent me a second device with a return label for me to ship back the faulty device. After using the second unit for a couple of weeks an internal screw came out and caused the AC plug to be loose. PowerStick immediately sent me another device with no questions asked. It does concern me that I had two faulty units but I do recognize that these things happen from time to time and it gave me a great opportunity to see how good the support staff at PowerStick actually is. I have to give them the benefit of the doubt and assume that my situation is an outlier. After all they wouldn't offer a lifetime warranty on their products if they were constantly failing.

I really wanted the solar panel on this device to be something magical but it's not. It does work but it's certainly not going to be your primary way of recharging the device. Don't buy this device if you're only excited about the solar power capabilities. Instead buy it for the huge capacity, the custom printing, the integrated AC plug, the pass through capabilities, and most importantly the lifetime warranty with wonderful customer service. If you have any questions I didn't cover feel free to leave those in the comments.