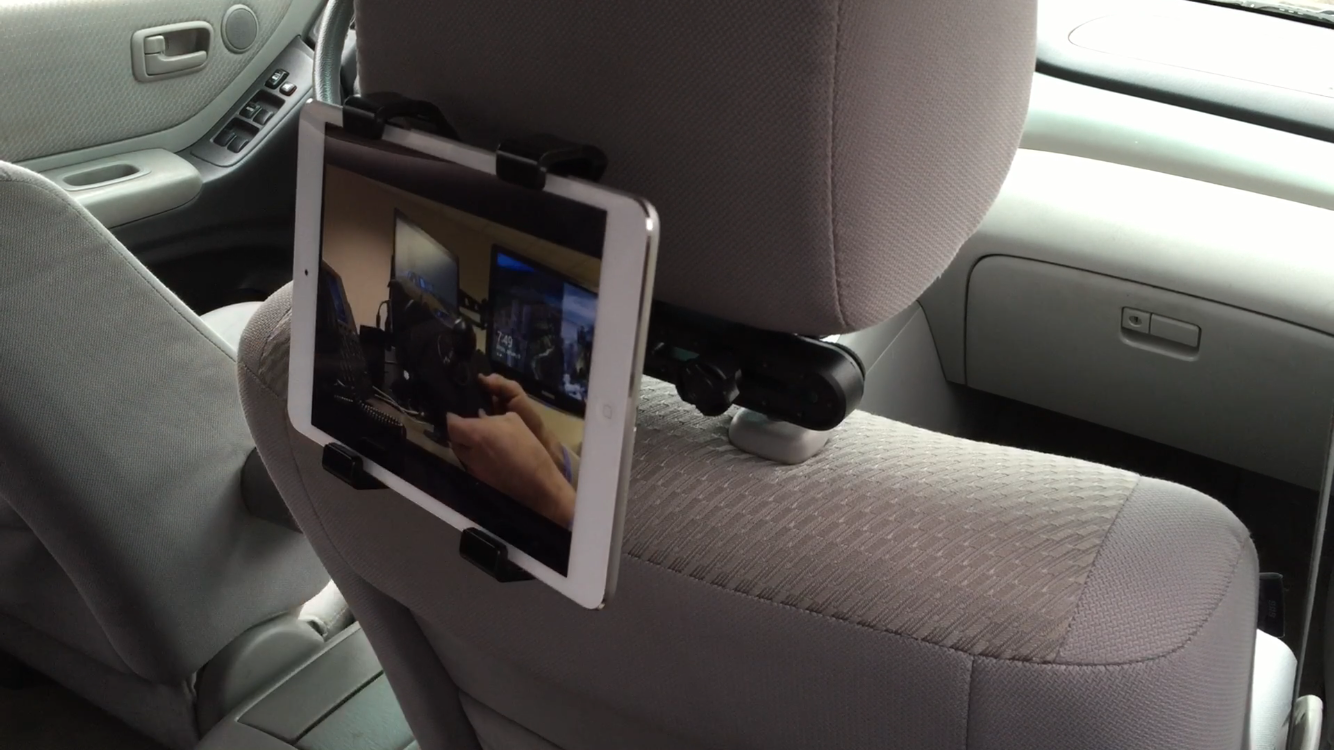 Video in an automobile is a really handy feature, especially if you have children. You could pay to have an expensive DVD player installed or you could leverage the digital media you already have on your tablet and buy this. This is the U-Grip Universal Headrest Mount for Tablets by Aduro. In my review of the Aduro U-Grip Suction Cup Mount I praised that mount for working so well, especially for the price. Aduro was kind enough to send me this headrest mount for review to see if performs as well.


The mount attaches to the metal arms of your headrest by tightening two adjustable knobs. Keep in mind that because of this design this mount won't work with integrated headrests. The install doesn't require any tools and only takes a few seconds. You're able to get these really tight which makes the mount very sturdy. The rubber backing on these peeled off within a couple of days. It's disappointing that better glue wasn't used but once it's mounted it's not an issue.

The bracket that attaches to your tablet is a sliding design that you can adjust depending on the size of your tablet. There's a lock on the back to help prevent the bracket from sliding once your tablet is installed. On the inside are several foam pads to absorb vibration and provide a tighter fit.

The bracket attaches to a pivot which can be adjusted by tightening the collar behind the pivot. The pivot contains four notches that snap firmly into four slots on the back of the bracket. This allows you to be able to turn the bracket to any desired angle.

I use my iPad Mini with a LifeProof Nüüd case. Because of the added thickness it was a little challenging at first to install in the bracket but once installed the snug fit makes for a very sturdy mount. After squeezing it together a few times though, you get the hang of it. This is important because you definitely wouldn't want to leave your iPad in plain view in a headrest mount when you're not in your car.

If you're one of the few brave ones that uses your tablet without a case, installing your tablet in this mount will be even easier. The only problem is the thin slick tablet has a tendency to slide around in the mount.

Once installed you can position the tablet to accommodate whoever is sitting in the back seat. This isn't as nice as the mounts that attach between the two front seats but is still very handy and won't block the view between the seats.

When driving there is very little vibration. My kids said they didn't notice any vibration at all while watching a video in the car. The larger iPad Air does tend to be affected a little more by the vibrations.

Because of the extra size and weight of the iPad Air, and it's thin, slick design, it did have a hard time staying in the mount when rotated to the portrait view, even with the bracket locked. A spring loaded bracket would have worked better for providing consistent tension instead of this notched design. However the main reason you'd use this mount is for watching video and no one is going to watch video in portrait mode. Aduro has taken this into account by making sure the landscape orientation is the most sturdy.

The biggest downside to this mount is the overly complicated pivot. You can rotate the entire pivot and collar counterclockwise until it tightens against the nut inside of the pivot. Turning it all the way clockwise will tighten it up against the mount. This is really the only way to keep your tablet from rotating and doing so tightens the collar to the pivot so tight that it can't be loosened or even adjusted without tools. This means that when positioning your tablet for the best view you have to spin it around until you hit one of these extremes to make the mount tight. Otherwise when you rotate the tablet it will freely spin and fall. Because of turning the tablet and tightening the bracket up against these extremes it's created some small stress fractures in the plastic bracket. They don't seem to cause any problems but it's certainly worrisome for the longevity of this mount.

In the end this mount is about what you would expect from a $13 mount. The problem is after buying two of the U-Grip Suction Cup Mounts for $10 each, and being so impressed with the quality, I really expected more from this mount. It will certainly hold your tablet well and your passengers will really enjoy having a video player. If interested you can purchase the mount on Amazon.  If you have any questions I didn't cover please leave them in the comments.