Which Mobile OS is the Best 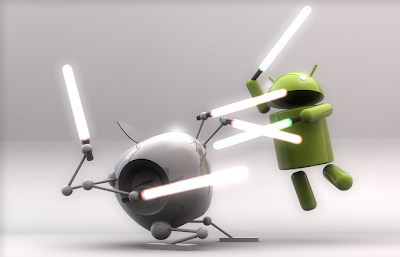 I'm constantly asked which mobile operating system is the best.  The more appropriate question should be which one is right for me.  As a former BlackBerry fanboy gone Apple fanboy, I definitely have my opinions on the matter.  Read on to see which OS is right for you.

Traditionally BlackBerry and Windows Mobile were known as the only smartphones available.  With the introduction of Google's Android OS and Apple's iOS operating system that's no longer the case.  Windows Phone is attempting to make a comeback, but having no experience with that I'll leave it off in this article.  Maybe in the future I can get to spend some time with it and update this article to include my thoughts on it as well.  For what it's worth a lot of technical writers are really excited about its potential.

For starters let's look at BlackBerry.  The OS that BlackBerry smartphones use hasn't been truly updated in years.  They've added new features but it's still the same clunky OS that it's always been.  Sure it's very customizable and powerful, but most users will get lost in a sea of menu's and never been able to find the options they're looking for.  However, BlackBerry smartphones are praised for their physical keyboards and battery life.  If you're one of the few remaining people that believe they need a physical keyboard, then maybe a BlackBerry smartphone is for you.  Later this month Research in Motion (RIM) is set to unveil it's new QNX based OS for phones and tablets entitled BBX.  It's a complete rewrite of their OS based on the same real-time OS that runs nuclear power plants, core Cisco switches, and car GPS systems.  It has a lot of great potential, but the proof's in the pudding.  We'll have to wait until it's released before we'll know if RIM still has a chance.

Next up is Google's Android OS.  Based on the idea that the OS is open source and available for free, Android has become very popular in the smartphone space over the past couple of years.  There is a huge market full of useful apps, most of which are free.  Also, the OS has the highest level of customization of any mobile OS available today.  Because of all the manufacturers that are making Android phones, the selection is huge.  If you don't like the current Android phones that are available just wait a week and a new one will launch.  Google is set to announce Ice Cream Sandwich, their next version of the Android OS, on Oct 11th.  Many people have said that this version of the OS will be a game changer for Google.  We'll have to wait and see.

Last in this comparison is Apples iOS.  Apple's iPhone has become wildly popular since it was introduced a few years ago.  Apple typically refreshes its hardware once a year and also makes a major update to is OS at the same frequency.  Of course there are incremental OS updates that occur throughout the year as well.  Apple has always been thought of as closed and very limited in terms of options and customization.  That's all changed with iOS5.  It's as if Apple looked at all the great features of Android and BlackBerry and implemented those into its OS.  In typical Apple fashion, the features are late to the game but once they're implemented they are much better than the competition.  iOS5 brings 200 new features over the previous OS and will be available on Oct 12th.

At this point the biggest differentiator between Android and iOS is the experience.  Lots of sites and marketing slides will show you a spec comparison of Android hardware versus the current iPhone hardware.  On paper the Android hardware may win.  But in reality it doesn't matter how many GHz your processor is if the software is poorly implemented.  Apple has a unique advantage that Google doesn't yet.  Apple designs the hardware and the software.  (I say yet because Google is in the process of acquiring Motorola Mobility and that may change.  Although Google says it won't.)  Not only that but they only have to design the software to run on 2-3 phones at a time.  A quick look at Verizon Wireless' website shows they currently offer 16 different model of Android phones.  And that's just one carrier.  This advantage allows Apple to make a much more fluid experience on their phones.

Android on the other hand always comes off as jittery to me.  Pull up the list of applications and scroll through them.  If you're watching closely you'll notice the list jerkily scrolling as you move through it.  Watch any hands on video of a new Android phone launch and you'll see what I mean.  At some point during the review of this brand new phone you'll see the lock screen stutter as it's opened or an icon that needs to be clicked on 2-3 times to get it to launch.  That's not what I expect from a $200 smartphone with a dual-core processor and more RAM than most Windows XP machines.  My default test for how fluid an interface is involves pulling up the pictures application and scrolling through them as fast as possible.  If they've put some thought into it the pictures should be able to scroll as fast as you can move your finger.  That unfortunately isn't the case with Android phones.

A huge plus for Android is its openness.  This allows for far greater customization than you could ever imagine.  If you don't like the way you scroll through the icons, to put it in Apples words, there's an app for that.  You can completely reskin your phone just by installing apps.  Also, the widgets allow you to run applications in the background that can quickly be viewed just by swiping around on your home screens.  When it comes to customization and making the phone your own, Android is king.

Unfortunately that's also a downside as well.  Every manufacturer feels the same way about customization as you do.  They typically apply some manufacturer skin on top of Android which ends up making it a more bloated system.  Also, as you move from one Android phone to another, you'll have difficultly performing the same tasks since it will be a little different on each phone.  For most people that's not a big deal, but as an IT administrator it makes it slightly more challenging to show users how to do things on their phones.  Lastly this affects upgrades as well.  Once Google releases a new version of Android, it then has to go to the manufacturer for approval.  During this process you have to wait weeks, if not months, while the manufacturer tweaks their skin to make it work with the new update.  This is a very frustrating process.

The other major attraction to Android is navigation.  Google has included turn-by-turn navigation in Android for free.  It works really well, too.  Apple is still using the traditional aerial view with a blue dot that shows you your current location.  It works great for me, but a lot of users really prefer the turn-by-turn version for obvious reasons.

Lastly, in iOS 5 Apple has introduced a new assistant feature named Siri for the iPhone 4S.  It features the first artificial intelligence on a phone that you can actually talk to using normal conversation.  It sees things in context and doesn't use keyword cues like most voice response systems.  It works with the native apps and there are APIs that will allow app developers to leverage it going forward.  Instead of trying to describe it, you should just watch the video demo.  This has the potential to be a game changer for Apple if it works as described.

In conclusions, there are lots of valid reasons that Android is as popular of a mobile OS as it is.  Navigation, huge device selection, openness and customization are just a few of the key reasons.  However, my pick is still the iPhone.  Once you see the fluid experience that it offers it's hard to use anything else.