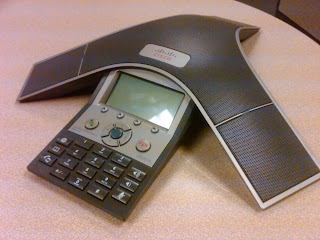 I was recently asked by one of our VP’s to investigate a way for people who are at a remote location to participate in a presentation at our corporate office.  My first thought was video conferencing, but video wasn’t necessary because participants didn’t need to see each other.  The only real requirement was to see the presentation slides and hear the presentation audio.  Since we have a Cisco Meetingplace server I figured that would be easy.  The challenge was the VP wanted the presenter to be heard clearly and not have to speak directly into a phone.  He suggested we find a wireless lapel mic.
After looking at the 7937 product data sheet it noted that the phone supports "a third-party lapel microphone kit".  I assumed this was a Polycom product since the Cisco conference phones are made by Polycom.
I opened a chat session on Cisco’s website.  Both a Cisco agent and his supervisor said they didn’t know how the lapel mic worked.  They also didn’t know where I could get one.  They recommended I call our Cisco reseller.  I called our reseller and their voice practice lead did some research.  They found out from two people at Polycom that their wireless lapel mic would not work with the 7937.  I contacted Polycom directly and they confirmed this.  Cisco told the reseller that they could not verify that anything from Polycom would work with the 7937 conference phone.  At this point it seemed really odd that Cisco’s data sheet states that the phone supports third-party wireless lapel mic kits, but neither Cisco nor the manufacturer of the phone knew where to get them.
I contacted another reseller that we work with and they said that the Polycom wireless lapel mic would work.  I verified that if it didn’t I’d have the option to return it since it’s almost $400.  Once he confirmed we could return it if it didn’t work, I placed the order. 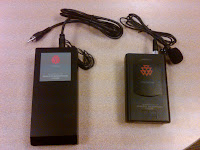 I received it this morning and it's pretty straightforward to put together.  It consists of a transmitter with a lapel microphone that takes a 9V battery and a receiver with an RCA connection and antenna.  The problem at this point is getting the RCA connection into the 7937 phone. 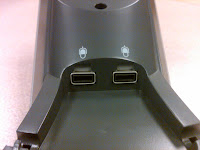 The phone contains two types of microphone inputs.  One of the inputs is a proprietary Cisco connection for two wired mics.  We didn't purchase these as it was an additional expense and when we've purchased them in the past on the 7936 phone we ended up not using them.  It wouldn't really help in this situation anyway. 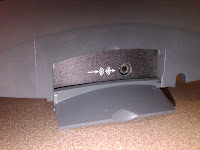 The other option was a 3/32" jack similar to what's on some cell phones.  This was hidden behind a door on the bottom side of the phone and had some obscure drawings next to it trying to explain what it's for.  The best I can tell is the drawing is trying to illustrate that this jack could be used for input or output, but I haven't tested the output portion or found any documentation on it. 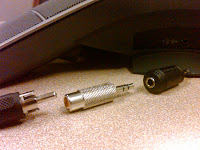 To get the RCA connector to plug into the 3/32" jack I headed over to Radio Shack.  Unfortunately they didn't have a converter that would convert RCA to 3/32" so I had to get two converters.  I'm going from RCA to 1/8" and then from 1/8" to 3/32".  I'm sure if I had more time I could have ordered a cable that would have 1/8" on one end and 3/32" on the other end so I wouldn't need any converters and wouldn't have to use the RCA connector that came with the microphone.  Since the converters were under $10 I decided to go ahead and try this route.  Maybe down the road I'll get a cable so we don't have to worry with losing these adapters.
I connected all the adapters up and plugged in the receiver.  I clipped the transmitter to my belt and clipped the lapel mic to my collar.  I placed a call to my coworker and it worked!  He could hear me loud and clear.  I went for a walk around our floor, out to the break room, and into a wiring closet.  He could hear me the entire time even though the antenna on the receiver wasn't even extended.  Also, I didn't have to look down at the microphone.  Just talking with my head held normally he could hear me great.
If anyone from Cisco or Polycom is reading this, the Polycom wireless lapel mic (Part #2200-00699-001) does work with the 7937. It doesn't directly connect, but after an RCA to 3/32" jack adapter you're in business.