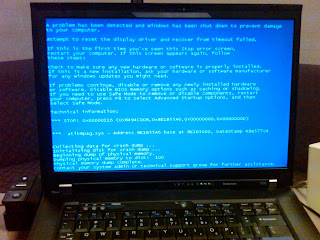 I'm usually a very early adopter of new technology. The biggest problem with that is you have to generally sacrifice reliability for cool new features. (They don't call it "cutting edge" technology for nothing). I avoided Vista for a long time because of all of the negative reviews. Then I reasoned, like anything else, after a while they would get the bugs out of it and it would work great.

I got this new laptop around the first of the year thinking that Vista had been out long enough that vendors would have had time to write stable drivers for their hardware. Boy was I wrong. From day one I've been getting these blue screens of death (BSOD) related to my graphic driver. ATI nor Lenovo have released a fix for this. So about every other day while at work my screen will begin to flicker. I then know that I have about 15 seconds to save anything before my laptop blue screens. Fun times.

Of course I could write pages of other reasons why you shouldn't get Vista, but hopefully you'll just take my word for it. Over two years after Vista's release and the world still isn't ready for it. I'm beginning to wonder if it ever will be. Windows 7 here we come.
EDIT: Lenovo eventually released a new video driver that corrected the issue and all is well.